Built in the XVI century, the monastery reveals the perfection of stone carving.
J.C.M. 28 de Outubro de 2016 às 16:05
A view from inside the church of Santa Maria de Belém, in the Jerónimos monastery FOTO: Duarte Roriz

If you start a conversation with any Portuguese about the history of the country,  there is a 9/10 odd you will hear about the ‘Descobrimentos’ (Discoveries), the period from the XV to the XVI century when Portuguese ships sailed the oceans in what now is described as the first wave of globalization. The Jerónimos monastery is a legacy of that time.

Ordered by king Manuel I -  the man in charge when the Portuguese reached India by the sea - the monument consists of various buildings from different ages. The ‘manuelino’ ornamentation is at its best. Stones shaped into maritime figures, anchors and knots are meant to celebrate a nation of sailors. There also rely the tombs of some of the nation’s greatest heroes - the poets Luís Vaz de Camões and Fernando Pessoa or the great conqueror Vasco da Gama.

Nearby, don’t miss the visits to the Torre de Belém, an ancient military fort, originally built to protect Lisbon from foreign invaders or the ‘Padrão dos Descobrimentos’, a homage in stone to all the heroes of the discoveries era. 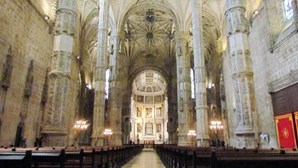