A plaza pulsating with the spirit of Lisbon.
Pedro Zagacho Gonçalves(pedrogoncalves@cmjornal.pt) 3 de Novembro de 2016 às 15:29
The amazing view from the top of the Arco da Rua Augusta FOTO: Pedro Catarino

Right next to the Tagus River, The Praça do Comércio (Commerce Square), also known as Terreiro do Paço, was the location of the Royal Ribeira Palace until the great earthquake of 1755 that destroyed Lisbon. The 1st Marquis de Pombal ordered de remodeling of the square, as part of the rebuilding project, known as the Pombaline Downtown, which was inspired by XVIII century French architecture.

The towers and buildings have galleries on their ground floors, which house many restaurants, cafés and even nightclubs, all bubbling with the cosmopolitan spirit of Lisbon.

The square, which was remodeled again in 2013, also houses two important stops for tourists: The Lisboa Story Centre – where you can learn all about the history of the city in 60 minutes (7 €) -, and the Lisbon Shop, where you can buy items typical from the city with creative and unique designs.

In terms of landmarks, in the center you can see the Statue of King José I, the monarch at the time of the 1755 remodeling. On the opposite side of the Tagus, there is the Arco da Rua Augusta, a massive structure that reminds of the French Arc du Triomphe, in Paris. There, you can climb to the top for a breath-taking view of the main streets of the Lisbon Centre, and also the river. 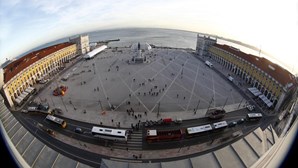