The place to drink a pint, watch a concert or dance.
J.C.M. 28 de Outubro de 2016 às 14:25
The Pink Street in Cais do Sodré is always in party mood FOTO: Helena Poncini

By day light, Cais do Sodré is one of city’s busiest places. Trains, metro and ferry stations bring thousands of commuters to the capital and there is where you’ll find one of the biggest and most typical markets of Lisboa, the ‘Mercado da Ribeira’. Beyond the common vegetables, butcher and fishing stands, it is now a place where you can try some of the ultimate trends in Lisbon cooking, from tuna burgers to bistro delicacies.

But it is at night that Cais do Sodré shines the most. In the pink street - the tarmac is actually painted that color - you can find bars, music clubs, a few small restaurants and lots of people simply enjoying a ‘imperial’ (an half pint of beer) in the streets. Once a place of bad reputation - sailors and hookers used to run the place - Cais do Sodré has emerged in the last years as one of the city’s night life spots. It’s the usual place people go after coming down from Bairro Alto, perhaps the neighborhood in Europe with most bars and restaurants per square mile. Understandably, Cais do Sodré will host some of the Pub Crawls of the Web Summit. 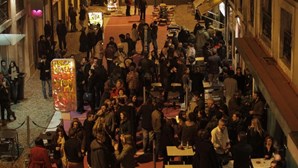 Enviar o artigo: The trendy nights of Cais do Sodré