See how Vhils carved the Portuguese spirit around Lisbon

Alexandre Farto, known as Vhils, is probably the biggest Portuguese name in street art. With works of art in walls all around Portugal, Vhils work in Lisbon perfectly intertwines with the cosmopolitan aspect of the city, also functioning sometimes as a homage  to the history and culture of Lisbon.

Vhils works most prominent characteristic is the use of elements already in the walls, such as paint falling, missing bricks or cracks in the concrete. Vhils usually carves faces in the side of buildings, bringing them to life with extreme detail and attention to texture.

Vhils best works around Lisbon are the ones below:

Rua Fábrica do Braço de Prata, em Lisboa, portrait of a girl, which some call M.I.R.I.A.M., because the work became kwon after appearing in a video by Portuguese band Orelha Negra with the same name

Works made for the urban arte exposition CRONO, in Rua Cascais, Alcântara

See how Vhils carved the Portuguese spirit around Lisbon 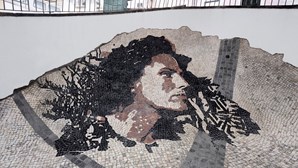